You have to remember that there COULD be a late frost in Indiana historically as late as mid-May. We did in fact have a late frost around May 5th or 6th. I had planted early, and paid the price of not catching that a frost was predicted by having to replant squash and pumpkins and some egg plants, and a couple of tomatoes.

May 10 – 13 has seen temperatures in the mid-eighties. In fact, I think it topped 90 degrees Fahrenheit on the 11th.

I think maybe we are past the last frost. In fact, the sudden heat appears to have caused the two rows of varieties of Chinese cabbages I was growing, which were planted 5-6 weeks ago with all the cold weather crops, to start bolting and flowering to produce seed.

It took me four hours to build, but in the first photo below is the poultry wire on frame cage I build on the 11th to protect my strawberry bed. I started it last year. It is 8 x 12′. The original 26 or so plants, which I kept from producing until late August by trimming flowers and runners, had produced runners late in the Fall after I let them go until frost. As soon as I could in early spring, I reseated the runners, and there are now 65 plants. The ones that matured last year are ready to start producing strawberries, and should do so off and on until frost.

When I got up on the 11th and looked out the door to see a deer checking out the garden and yard at 6:00 am, I decided that any more delay was risking waking up the next day and finding the deer had cropped the strawberry plants to the ground. They actually did so late last Fall when I quit turning on the water scarecrows. (Best prices probably on Amazon, much below what the manufacturer lists.) 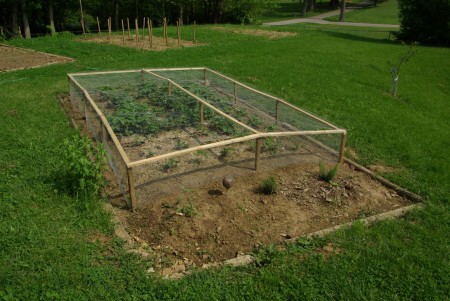 The strawberries are what is called a “day neutral” variety.

The next few pictures walk through the sections of the vegetable garden from north to south. I took advantage of a few days of dry weather we had about six seeks ago, when it was still pretty cold, and I prepared the first two sections below. I then planted nearly thirty 7-8′ rows of cold weather crops, various lettuces, greens, varieties of cabbage, radishes, beets, onions, leeks, and two varieties of sugar snap beans. You can see one row climbing its fence in the back of the first picture below. 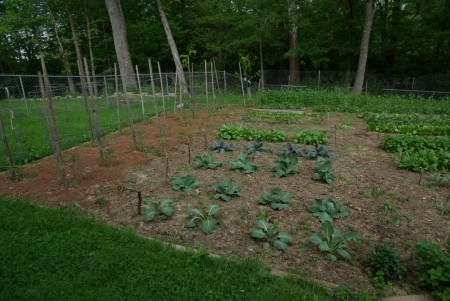 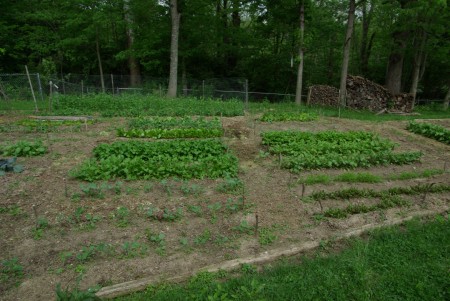 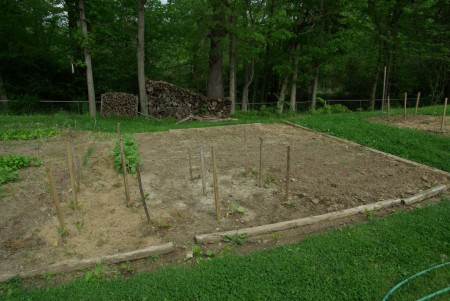 As of May 11th, the section above has some icicle radishes, and leeks barely getting started, and some scraggly eggplants that have been set. The rest of the area was seeded with Clemson Spineless okra, and three varieties of bush and pole beans, on the 11th. One off the bean varieties is named ‘Rattlesnake Pole Beans’. How could I NOT plant that? 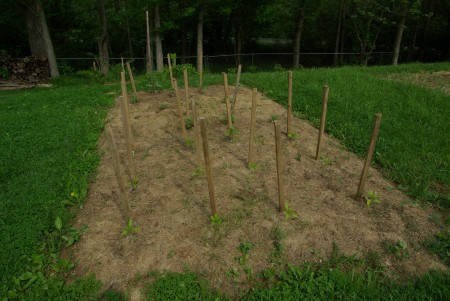 The above section is mostly peppers, over a dozen sweet and bell peppers, but three habaneros, and one hot small red pepper grown each year and sold at May’s Greenhouse here in Bloomington. It is named “Jean’s Chinese Pepper”, after one of the proprietors of May’s Green House. It is a delicious hot pepper. 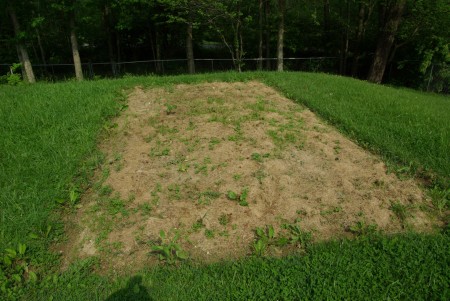 Not much to see, but eventually, assuming I can fend of the squash borers and the leaf mold and rust, there will be two varieties of sugar pie pumpkins, and yellow squash varieties, a zucchini, and a butternut squash. This plot, like the one before it, is only in its third year of use as a garden. I have been adding compost with manure, plus bales of peat moss from Canada, every year, and tilling it in deeply, to try and make what was previously pretty bad soil for gardening something you could grow vegetables in as fast as possible. 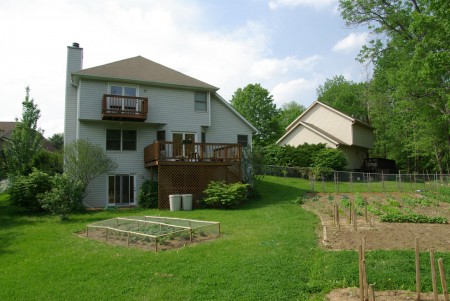 Finally, above is shot of the house and most of the garden to the right, the strawberry bed in the center foreground. At the base of the deck are two rain barrels we just purchased. I am waiting to see what happens with a couple of rains. I have a suspicion they will fill up so fast just sitting there I won’t need to tap into the drain spout at the left corner of the house in the picture, as I had originally planned.