At the age of 8 months he was struck a glancing blow by a car. The vet managed to save him from the concussion, and put a steel pin in one shoulder bone. It stayed there the rest of his life and never slowed him down. Until just a few years ago, he could still climb the 4×4 vertical timbers supporting our deck if he wanted to, just to show off and get from the yard onto the deck to be with us.

He was my buddy for 18 years, spending time in my lap while I read or watched TV every night until the last six months. We treated him the last year of his life for hyperthyroidism. It added a year of quality life for him.

He had gone pretty much stone cold deaf the last few months, and about December 1 started going blind. We narrowed his little world to an area with barriers so he could find his way to food, water, litter box, and his bed, but realized he was fading fast. The last two days he could no longer eat, drink, or get out of bed. He would call out for us, alone in the silence and dark, and we would pet him and calm him, he would recognize we were there and quiet and go back to sleep.

We refused to take him to a vet, and have him end his life in fear in a strange smelling place. Our animals are like members of our family. We took turns sitting with him the last two days and comforting him.

We gave him sedatives to ease his pain. He relaxed after I started administering them, and kneaded my hands for 20 minutes as he drifted to sleep. His tough little body lasted another 12 hours, but we kept him sedated, and he slept. We held him as his body finally gave up and breathed his last breath.

18 years is a long time for a cat. Think of it. He was with us for nearly a third of my life. 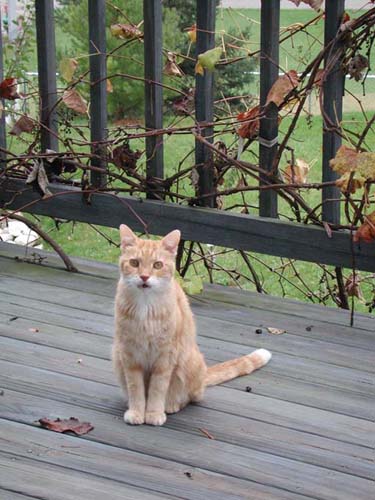