We are on the northern edge of a stalled weather front that runs from Texas / Oklahoma right up the Ohio River Valley. For the past five days we have experienced one low pressure wave after another, bringing either violent weather with thunder storms and even some tornadoes, but mainly very heavy rainfall. I checked the NOAA web site this morning, and to the south of us in an area centered on Jaspar, and stretching east to west, much of that part of the state is at a cumulative 6 – 10″ of rain or more for the storm period.

This link goes to NOAA and weather.gov web site, with a link on the left to choose “Rainfall Storm Total” to flip the radar image to show cumulative storm totals over southern Indiana. In fine print above the image it will state the date range covered by the cumulative data. FWIW, the first static image defaults to a date range not necessarily through current date. Just click the ‘storm total’ link, and it will expand the date range stated above the image.

While driving home from some shopping this morning just before lunch, we passed at least two mature dead racoons on the busy US 41 Bypass, which is undergoing heavy construction. This is not normal. There is constant traffic on that stretch, and animals avoid this main thoroughfare because of that. I have almost never seen animals killed by traffic along that stretch. Carol told me she had read in the Bloomington paper, the Herald-Times, that the heavy rains have created flooding and conditions that are driving wildlife out of their normal habitats. The report quoted a group that specializes in trying to help wild life. Given that these are essentially urban animals, that habitat was already constrained in the area of the bypass, which is pretty well built-up and populated.

I wonder if this explains the turtle pictures below. I had been on a walk to take pictures of wildflowers during the brief period of broken clouds and a little sunshine earlier in the morning, before we left to go shopping. It is not usual to see a turtle up near the golf paths and open areas of the golf course mid-morning. But there he was. I have to wonder if the heavy rain is not affecting him and his movement patterns.

Here are a couple of the pictures. He is an absolutely beautiful box turtle. 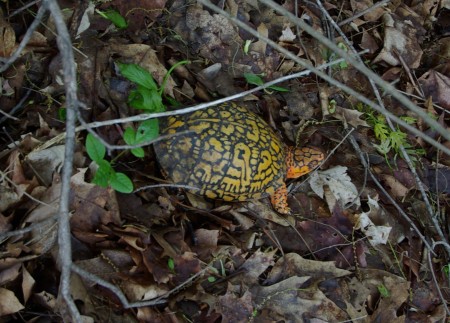 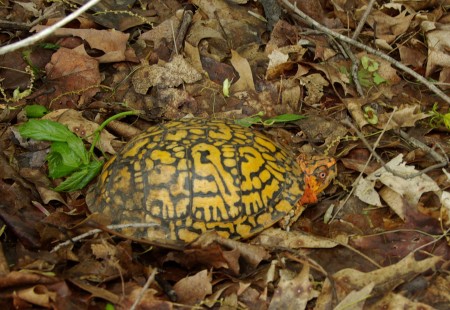