Since I broke my ankle almost eight weeks ago, the only thing that salvaged at least 80% of the vegetable garden was our son, Tim, coming over for a few hours every day and pulling up weeds and harvesting. In the 10 days after the accident, before he got started on it, the garden was almost completely overrun by weeds, and eggplant and okra were almost wiped out.

As for the tomatoes, the war with the deer continues.

We were late setting up the water scarecrows, but about a week ago finally got them up and running. But that evening, we forgot to turn them on, not having gotten the habit going for the year. Naturally, the deer sensed this, and swept through and wiped out the couple dozen tomatoes that had managed to set, and to boot they cropped the plants themselves. They even pretty much destroyed the okra plants that had gotten a start, something I have not seen them do in the past. They had already helped themselves a couple of weeks ago to the blackberries on the one plant I started last year that was starting to bear this year.

Just to make matters worse, after we finally got all four crows set up and working, in the past four days two new garden hoses from Lowe’s have failed. One burst out of the coupling as soon as the water was turned on. Two nights ago, a second one, same brand and batch, simply ruptured in the middle of the night halfway along its length. I heard the sound of water at the spout on the side of the house when I got up about 5:30, and knew we had a problem, got dressed, and went out and turned it off. That one is going back to Lowes for a second refund this morning.

This morning, when I went out early to start to collect the ruptured hose and start the sprinklers on the garden for the remaining producing squash, pumpkins, tomatoes, cucumbers, broccoli, and a few remaining cabbages, plus some sprouting okra and beans and lettuce we are trying to get started in the middle of what the weather service is calling an “excessive heat watch” and dry spell, I discovered our friendly local turtle had found a tomato the deer had knocked off a vine but not eaten.

At least I am happy the turtle is profiting from all this. 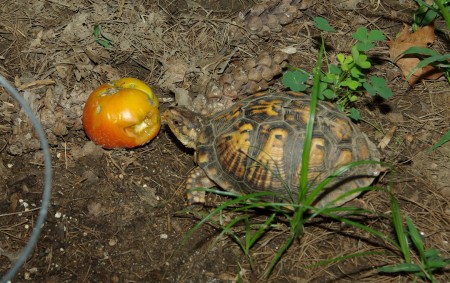