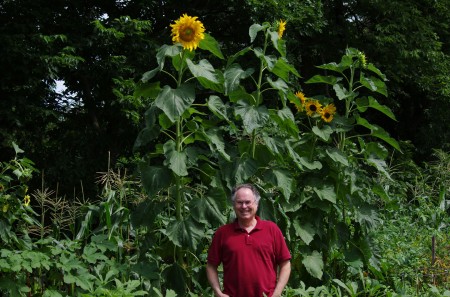 (NOTE: All pictures are clickable for a higher resolution version.)

This year was probably the best vegetable garden I have ever grown. I had a soil analysis done by a lab in Fort Wayne recommended by Purdue Agricultural School, and discovered the soil was severely deficient in nitrogen. I ordered 46-0-0 urea fertilizer in bulk, and spread and tilled it in, along with sulphur granules, to lower acidity of the soil to a more neutral pH balance.

I planted as early as possible, and we had greens and sugar snap peas and lettuces very early. I planted 24 tomato plants, about 18 varieties, two weeks before average last frost, which used to be middle of May. We had to cover the plants one night because there was a frost advisory, but all survived OK. The tomatoes produced early and in great quantity, and we have been enjoying them, including several heirloom varieties like Black Krim and Cherokee Purple and German Striped. There are four varieties of grape tomatoes, including a dark purple heirloom. 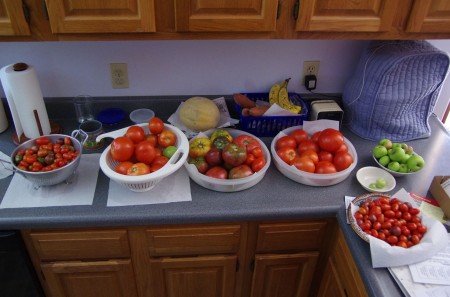 This year I planted four spots of sunflowers, multiple varieties, including one called “Titan”. I think the seeds for it came from Indiana University’s Wylie House spring heirloom seed sale. We went to it, and I planted several varieties of heirloom vegetables, including a squash, some gourds, and a yellow (Jaune) cucumber.

Following are some of the best pictures of the sunflowers as they have peeked the last few days. The flower heads on the Titan are easily a foot across. There is a picture of me below standing three feet in front of the Titans. You can see the plants are probably 11 – 12 feet tall. The heads are now so large and heavy they are drooping and nodding from the weight, thus the photos below shooting up into the sky for a couple of them.

If you look at the last four pictures, they were taken July 7 or so. The first three show the three sections of the garden from north to south. The last one is the strawberry bed, which by then was through with early production (we harvested 11 pounds of strawberries, and threw away four pounds spoiled by too much rain which had them rotting on the vines).

I planted four rows of varieties of small potatoes in the center section of the garden. So far I have harvested one row, 15 lbs of Pontiac, a small white potato, which makes the best hash browns you can imagine. Yesterday I dug up the second row, the red potatoes, about 20 lbs of them. 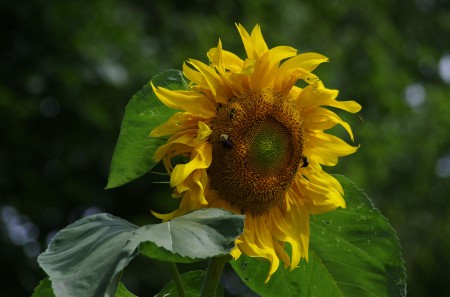 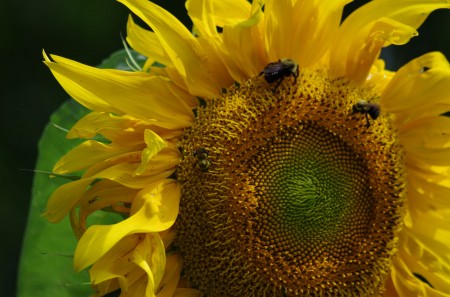 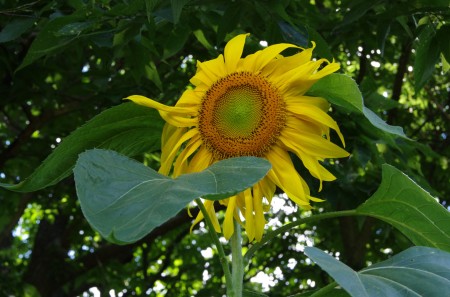 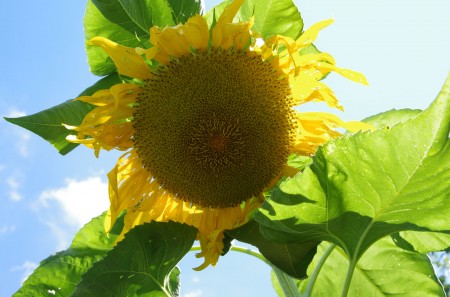 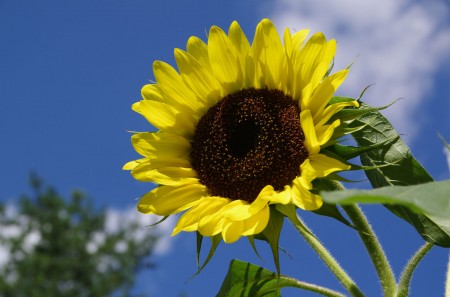 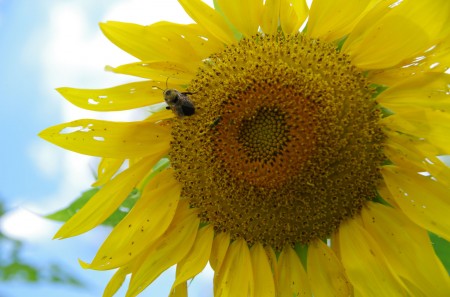 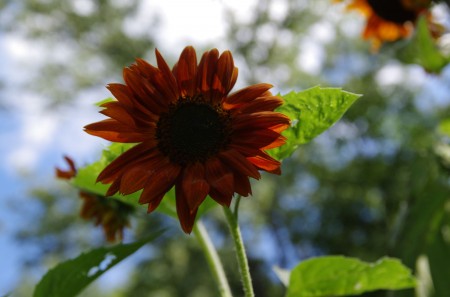 Of course, as I always say, gardening is a true existential experience, which makes you confront the fragility of life. For some things, all the work went to naught. This year, despite all my efforts, the insects and rot and wilt diseases pretty much destroyed the cabbages and over half the three kale varieties, even more than half the collards, by the end of July.

If you look in the second picture of the garden, you will see on a post a hose pipe connected to a water scarecrow. There are four of them, including two in the third section, where the tomatoes are. Without them turned on every night, the deer would strip the tomatoes clean, and destroy most of the greens. 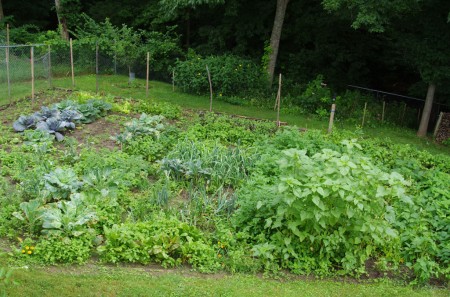 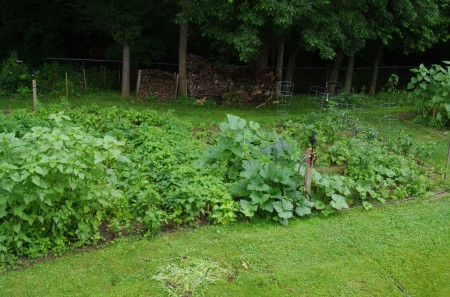 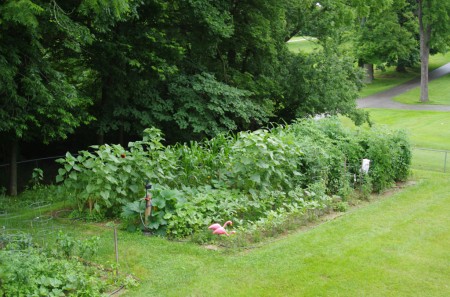 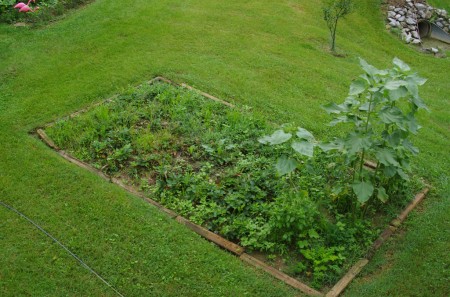 The saddest episode was the sweet corn. I have never tried growing corn before, because of space restraints. This year, having extended the garden to about 1,800 sq ft, I planted two rows. Last weekend, they were just getting to the point where one of the varieties was about ready to pick. Corn on the cob was on the menu. Then we came back from a two day mini-vacation to discover the racoons had trashed the half of the corn almost ripe, and stripped the cobs and chowed down on practically every ear of corn. The next night, they came back and destroyed the rest, even though it was not even ripe yet.

Oh, well. A few years ago, when we had grape vines producing heavily on the deck, I had to trap racoons and relocate them for six weeks. I hauled off 15 racoons that year. Maybe next year I will have to do the same thing. I also was told by an acquaintance who used to grow vegetables that putting a radio in the middle of the sweet corn and leaving it playing will keep them away. Next year, I will add that to the mix.