The last two pictures I took before the last of the snows melted were the two below. We noticed the woodpecker, a Downy or Hairy, hanging onto the rail, and not moving. After a couple of minutes, we became concerned, because even though we were moving behind the glass doors, enough usually to startle any birds feeding on the upper deck, this bird was absolutely immobile.

I got the camera out and got the two photos. Finally I got right up to the glass and moved my hand. At that point, he moved, and flew away.

We were just glad he was OK, not injured or ill. Maybe he was just posing for the camera. 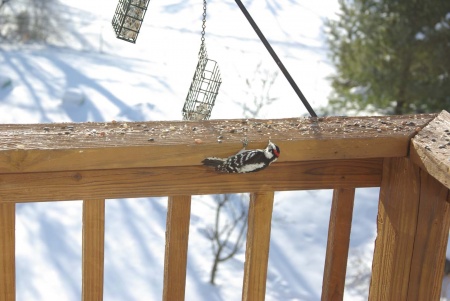 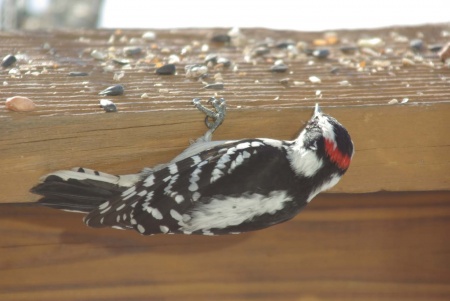 This winter for the first time in several years we enjoyed doing a couple of large, complex crossword puzzles. We devoted the dining room table to this. Over Christmas and finishing up for New Years, we did a 1,000 piece puzzle of a New England water mill. Then we did a 1,200 piece puzzle of a beautiful snow clad, wintery Schloss Neuschawnstein in Bavaria, southern Germany. Both were difficult, but a lot of fun. If you are into complex pattern recognition practice, this is a great way to spend some time during the short and dark days and longer nights of winter. 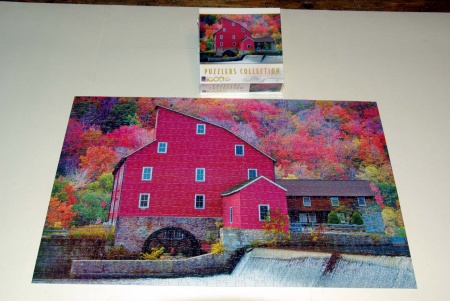 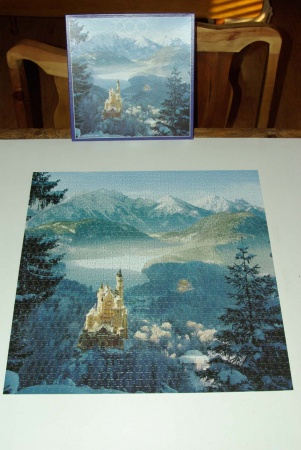 We had tilled and prepared about half the backyard vegetable garden, with added peat moss, composted manure, and some 10-10-10 fertilizer, last Fall, before cold and wet weather set in. For the past three weekends this Spring, we finished up with final tilling of the upper part (on the left of the first photo below), and on Saturday, March 27, we planted four kinds of cabbage, kale, collards, Brussels sprouts, and cauliflower, some of the cold weather plants from seedlings. Since then, we have finished the two of the three newer beds, the one to the right and down in the second photo below, which will be the expanded herb garden, and the leftmost of the two smaller plots in the upper part of the second photo. The smaller one at top of the photo will be planted with okra this year. Okra is always the last thing to plant, well after last frost, it wants the soil temperature to be very warm, or it will not sprout.

We are going to take a picture every day or so of the garden this year until end of season, to document its progress, and, we hope of course, success.

Last year we expanded till the total area was about 1,400 or more square feet. This year, it is probably somewhere between 1,500 and 1,600 square feet.

The pictures are from left to right, taken from the upper deck. 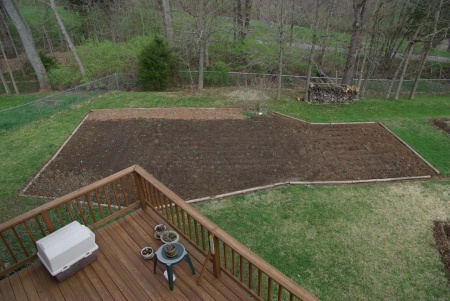 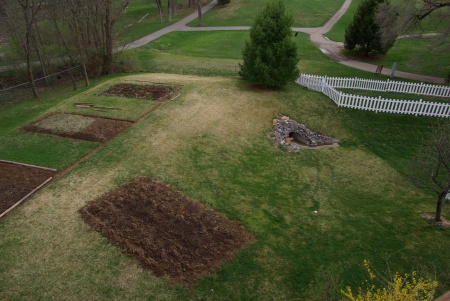