For the past five or more years, our house hosted a next of honeybees. They had taken up residence inside the siding and wall of the house at the base of the balcony on the upper story on the back of the house. Given the threat to bees from sudden death and disappearing colonies syndromes, we did not want to kill them.

They were so healthy over the years that in May, 2008, they spawned two distinct and separate swarms over a period of three days, swarms which after organizing and talking it over, set out to create new colonies. Leaving at the time a continuing healthy colony in the wall of our house.

Several times over the years we invited bee keepers out to examine the situation. We offered them the bees, if they would climb up to the base of the third story and pry them out of the wall. Interestingly enough, all never called back to carry through. What could possibly be an issue with hanging onto a ladder three stories above the ground trying to pry a bunch of bees out of their home inside the nice, safe wall of a house, right?

This Spring, as the weather warmed up during April, 2010, giving us days in the 70’s and even hitting 80 a couple of times, we observed that there was no activity from the nest. There was no stream of bees in and out of the side of the house, gearing up for another season’s business.

We contacted a local company that does siding installation and repair, and today they came out, climbed up their ladders, and after very carefully reconnoitering and prying up the edge of the siding and venting under the overhang, and discovering only a few remaining dead bees, they proceeded to open up the venting under the protruding joists, and to remove not only handfuls of dead bees, but the assortment of honeycomb in the pictures below.

Obviously, the older generation comb is the black, and the more recent the light “honey” colored comb pieces. All were empty of any honey, and clearly had been cleared out by the departing colony as they left.

Needless to say, in a world that needs their work to pollinate the plants and trees that grow much of the food we eat, we wish them well. Especially in a home somewhere other than in the interior of the walls and joists of our house. The guys who did the cleanup and repair reported no evidence of damage to wood and siding, and they sealed up all along the edges and corners the bees had used as their entrances, just to discourage any future tenants. 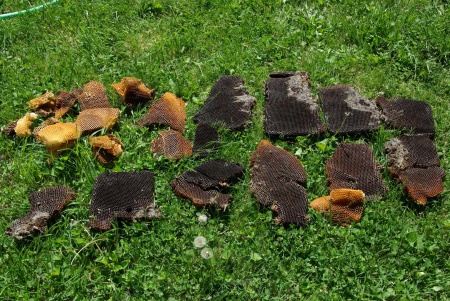 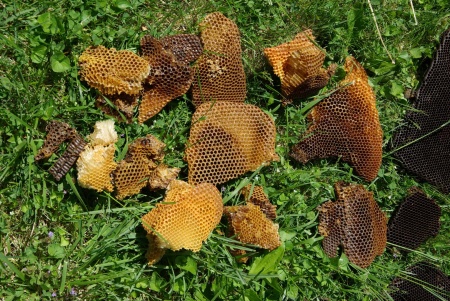 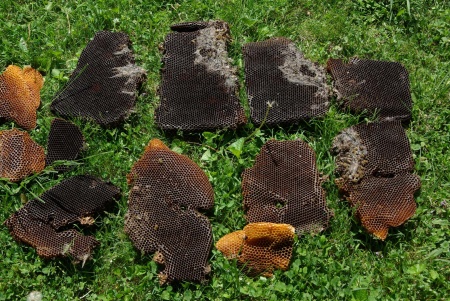 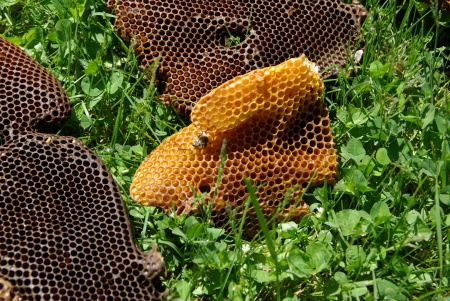 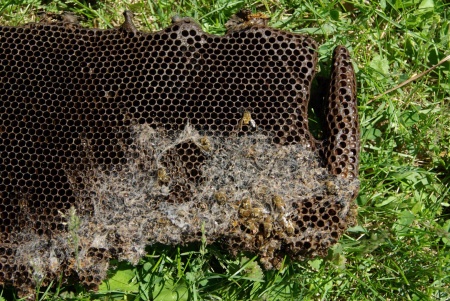